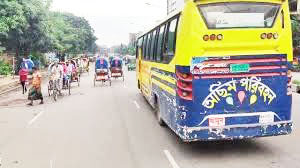 If you live in the capital, you need to know the local buses and routes of Dhaka at all times. You can take the help of Google Maps to travel anywhere in the capital, but if you want to know which bus routes in Dhaka, follow our page GOROLI.

Achim Paribahan Bus size from 42 to 52 seats. They also provide a half-price student fare but government Day off Friday half price off.

Thanks for watching our site.

Prev Next 1 of 9
Popular Topics